(Stats & Graphics Courtesy of Mike Orr, Cromford Report) WOW, I wasn’t kidding when I said “What a Ride!?!”  I’ve had the luxury of working

A couple of weeks ago, we kicked off here at Integrity All Star Realty our Client Appreciation Holiday Contest and one way to enter to

A little about Rebecca & the Integrity All Star Team! 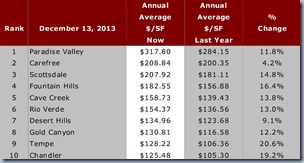 WOW, I wasn’t kidding when I said “What a Ride!?!”  I’ve had the luxury of working now full time for over 20 yrs in my chosen profession and I can honestly say that this last Real Estate “Roller Coaster Ride” lasted much longer than most of us ever had anticipated.
I do practice Real Estate all over the Valley, but with my office and home located in the City of Chandler, the following stats in this blog will be based on the City of Chandler. If you do not live in Chandler but instead in another Metro Phoenix city, please see the following list of 41 Cities to see where your city ranks with price per sqft.  The market conditions that effected our homes’ values over the last 10 years took the same “ride” all over our Valley, however just at slightly different price points depending on the area itself. Currently, the City of Chandler is Ranked #10 for Annual Average $ per sqft in the Valley of the Sun at $125.48, an appreciation of 19.2% from last years average.

In order to better predict what’s ahead for 2014, studying the past to see the trend we are currently on is best unless you have a crystal ball… and if you do, can you please enlighten me on where to get one as sadly I don’t think I remembered to put that on my list to Santa this year??
In 1994, I’d bought my first home off of Ray & McClintock Rds in Chandler for $1 over the Auction list price of $88k ($54.83 $pft).  Being just 1 year after I’d first earned my Real Estate license, with rates fluctuating between 6 3/4% to 7% (which was considered good at the time as historically we’d seen rates much higher) it was all I could qualify for.  Being a foreclosure, it was a true fixer upper but a great starter home being a HUD home.  Features included: being built in 1983, 2 story, corner cul-de-sac lot with West facing oversized backyard, 3 bedrooms, 2 bathrooms, 1605 sqft., 2 car garage with covered porch and patio.  I’d sold it 6 years later in 2001 for 140k ($87.23 $psf). That’s an average of 10% appreciation per year which had far exceeded the “norm” at the time. (interesting side note, in February of both year 2001 and 2011, our average price per sqft was the same in Chandler @ $88.35 $psf).
Traditionally, 4-6% per year annual appreciation was a safe investment and one you could typically count on in a normal market when one owned Real Estate and was higher than one could yield with your local bank on interest.  An average interest rate of around 7% was also average was what one could expect in the mid-nineties vs. today’s still historic low rates which are at or below 5% 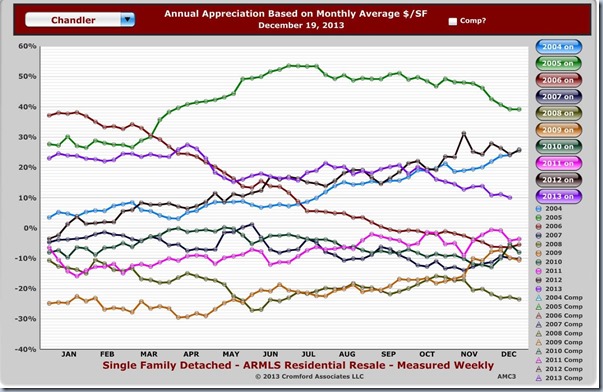 (If the image is hard for you to read above, please click on it to download the pdf)
Let’s now fast forward from 1994 to 2004, so we can focus on average annual appreciation in Chandler in just the last 10 yrs.

HOLD ON TIGHT- we are climbing to the top of our ride just a short year later… The average annual appreciation in Chandler peaked in 7/05 to a whopping 53.4%!  By the end of 2005 (Week 52) December we rolled through Splash Mountain and cooled to a mere 39.2% average annual appreciation in Chandler.  What was going on here? In just 6 short months, we dropped 14.2% Was this just a seasonal cool off? Or was it a sign that we may be heading for more than just “Splash Mountain” and instead a drop from The Matterhorn Mountain (wherein lies the Abominable Snow Man)? Obviously, we all know now it was sadly the latter of the two…
In 2006:

(Why this happened and who was to blame was the topic of many a blog already, my focus today is to get you to tomorrow’s likelihood for our local market so that you may make an educated decision of what’s best for you and your family in 2014.)
In 2007-2011 (AKA The Dark Years):

Let’s take a closer look at this past year with weekly appreciation stats:

In October we had our Government Shut Down which had hurt consumer confidence, the Feds had also announced they were going to taper buying bonds which sent rates higher (which they are also doing again right now), & decreased affordability with higher prices have all led us to where we are today. Watch blog with Academy mortgage from October 2013 talking about this in more detail.

Finally, here we are with 2014 nearly upon us.
If pricing continues to remain flat, we would be at 0% (ZERO) appreciation before long, but the good news is that there’s 1.7% appreciation predicted for January 2014, meaning that within a month, we may be at an annual average appreciation of just under 12%.  When the Cromford Market Index hits 100%, that would mean that Supply and Demand would be Equal.  We’d have more of a Traditional market with an average supply of 4-5 months.  It’d be a “Safe” market to invest in where you wouldn’t risk losing Equity, but the gains would be minimal, like in the beginning of 2004. Our current weekly trend is at 5.1% average appreciation which is quite healthy.  We are coming off of a culmination of the last 12 months having a total of 19.2% annual average appreciation over where we were 1 year ago.  This is actually a much more fun environment to live and work in because we most likely will not see any huge highs or lows if we continue on the current path we are on.  Builders will continue to gain momentum as the resale inventory is still low, therefore keeping prices stable if not increasing ever so slightly. 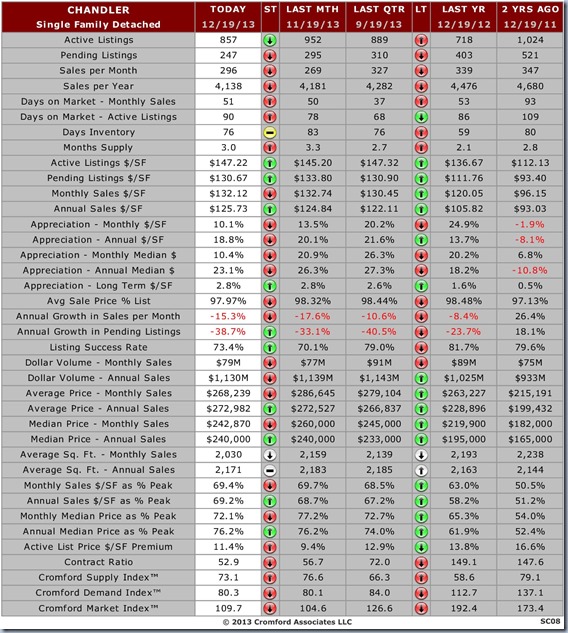 (If the image is hard for you to read above, please click on it to download the pdf) 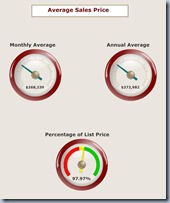 Today:  Supply is at 73.1% and Demand is at 80.3% however our Market Index overall is still above 100%, coming in at 109.7%.  Our current Annual Average Price is slightly higher than where we came in last month, at $272k per home in the City of Chandler.  1 yr ago we were at $263K, and 2 yrs ago we were at $215k. Our Market index respectively were 173.4% and 137.1%.  As prices have raised, our Market Index has lowered, which is hand in hand with the Supply and Demand stats.
From my educated guess, I am liking where we are going. It appears our Roller Coaster ride has finally come to an end, for now anyhow.  Real Estate is cyclical and one thing that is constant is change.   2014 should be a year where the waters seem to calm and good homes will sell within normal traditional time frames when they show nicely and priced appropriately.  Expect interest rates to remain good in historic terms, at or around 5%.  Our current annual appreciation of 5.1% is a good “safe” place to be.  (Click here for Mike Orr’s commentary on the overall market for December) Whether you may be a Buyer or Seller (or both) in 2014, it should be a good time to make your next Real Estate move.  We are here to help!

Information provided is a combination of Rebecca’s opinion based on the Real Estate stats provided by the Cromford report and Rebecca’s 20+ year experience working full time in our local Residential Real Estate Market. If you don’t live in Chandler, but would like to know the stats for your city, please feel free to contact Rebecca and she can provide it to you or a customized report for the Real Estate you own now or would like to own. Please feel free to contact Rebecca at 480-243-4242.