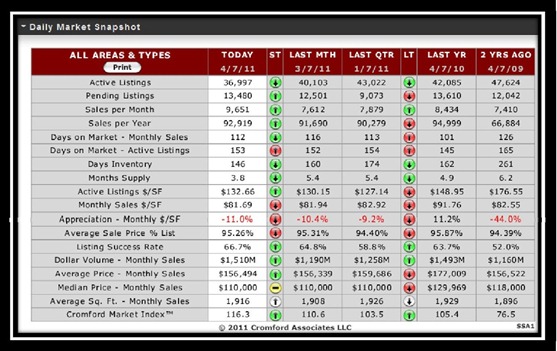 Meanwhile demand is accelerating while supply is falling quickly.

Supply is falling in almost every geography and price range but is most noticeable at the price ranges below $150,000 and in the outskirts of the valley, particularly in Maricopa (city), Queen Creek, Anthem, Casa Grande and Buckeye, This largely due to enthusiastic buying of homes built in the last 15 years which can be found for sale at a discount of 70% or more compared with their price at the time of construction.

Trustee sales in Maricopa County hit a high number of 5,226 in March, due to the trustees catching up from the Bank of America moratorium in November last year. Notices of trustee sales were only modestly up from February at 5,397, which is not an impressive number given that March contained a lot more working days for lenders than February. As a result the number of homes pending foreclosure dropped sharply during March to the lowest number since March 2009.

Third parties buying at trustee sale made a new record with 1,379 purchases (26.4% of the auctions). This is by the far the largest number of properties ever purchased at trustee sale. Another 3,842 properties got no bids and went to the beneficiary to become REO inventory. This may help slow the fall in the REO inventory listed for sale of ARMLS.

While average sales prices are very slightly higher in March compared with January and February, there is still no clear sign of a significant trend forming. The median sales price has been stuck at $110,000 for three month now., again with no sign of a major move either up or down over the short term.

With the balance between supply and demand changing quite quickly for the better over the last four months, we are down to an overall inventory level of 4.2 months based on the monthly sales rate. This can be regarded as a "normal" reading for the time of year (it is below the 4.5 we measured in 2002 at the same point in our last "normal" year). This goes a long way towards explaining why prices have stabilized once again.

Currently the trend is for supply to fall further and demand to increase, and if this continues then at some point it is likely to lead to prices moving higher. How soon and how much, it is too early to say. However it is not too early to say that prices are unlikely to fall to any significant degree while this situation persists. Last year the disappearance of the tax credit at the end of April caused the market to deteriorate suddenly in May and pricing fell sharply between July and September. At the moment we see no indication of a similar interruption to the recovery process that is now under way.

(Report from Mike Orr of the Cromford Report)

Please call us at 480-243-4242 if you are looking for a home to purchase and we’ll happily send you a customized list (at no charge) or start shopping here on our website.