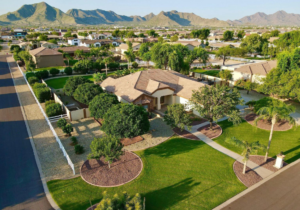 Dwellics, the authority in U.S city data and personalized advice on where to move, today unveiled the 2022 reports on the Top 100 Best Cities to Raise a Family in the Midwest, Northeast, South, and West. And Metro Phoenix did very well as Queen Creek was named the best city to raise a family in the West.
Dwellics analyzed data on over 50,000 U.S. cities to compile the report, with a focus on the quality of education, community, climate comfort, infrastructure, safety, and finance.
The highest-scoring city nationally is the town of Fort Mill, South Carolina, achieving a near-perfect score of 99.99 out of 100 total points. The best cities to raise a family in each region include the following:
• Best Place to Raise a Family in the West: Queen Creek, Arizona (97.68) and Vail, Arizona (97.32)
• Best Place to Raise a Family in the Midwest: New Albany, Ohio (98.23) and Dublin, Ohio (98.11)
• Best Place to Raise a Family in the Northeast: Limerick Township, Pennsylvania (94.96) and Murrysville Municipality, Pennsylvania (94.35)
• Best Place to Raise a Family in the South: Fort Mill, South Carolina (99.99) and Lucas, Texas (98.66)
10 Best Places to Raise a Family in the West
1. Queen Creek, Arizona
2. Vail, Arizona
3. Chandler, Arizona
4. Catalina Foothills, Arizona
5. Folsom, California
6. Gilbert, Arizona
7. Clovis, California
8. Sheridan, Wyoming
9. Irvine-Lake Forest, California
10. Powell, Wyoming
The highest-scoring cities in each region share several common characteristics. Top cities have an exceptionally low risk of natural disasters (including earthquakes, hurricanes, volcanoes, and wildfires.) The highest-ranked cities also have a high percentage of workers in the industries of educational services, healthcare, and social assistance, which reflects the importance of those professions to families with children. In reference to population, the top cities in each region are small to mid-sized, suggesting that large cities lack the characteristics beneficial to raising a family.
Nationally and in the west, the best state to raise a family is California, which scored forty-two entries on the list. Ohio is the top state in the Midwest with thirty-six cities; in the South and in the Northeast, Virginia and Pennsylvania get top marks, with twenty-six and thirty-three cities, respectively.
According to a report released by Upwork, the world’s largest work marketplace, America’s shift to remote work will drive a significant increase in migration; this surge in the numbers of households planning to relocate overwhelmingly affects those living in major cities, with almost 55% of people planning to move more than two hours away from their current location. As more parents and families are finding, being untethered means being able to relocate to seek out the best for their families.