How long is this market going to keep increasing?

Seems to be the magic question these days- was just asked this yesterday by one of our repeat clients who’s concerned if she doesn’t sell her house today, that she may miss the boat….

I turned to Mike Orr of the Cromford Report and Director of the Real Estate Theory & Practice for ASU for the answers as he seems to be our best and most reliable predictor and follower of our local Real Estate Market.

The following 2 graphs are from the Cromford Report- this first one the “Daily Market Snapshot” with current stats compared to last month, last quarter, last year and 2 years ago for the entire Metro Phoenix Area. 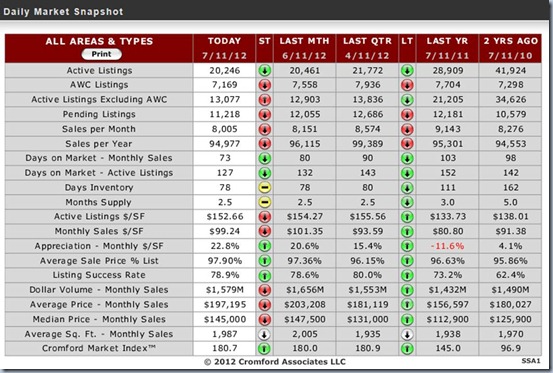 This one is specific for Chandler/Gilbert and shows the ACTIVES on the market and the ratio of Short Sales vs Bank Owned (REO), Traditional Equity, and HUD home listings. As you can see, we are returning to more and more traditional listings with a small fraction of what’s available being a “distressed” sale (Short sale, REO or HUD).  With the recent increases, less people are finding themselves upside down like they had been in 2010/11. 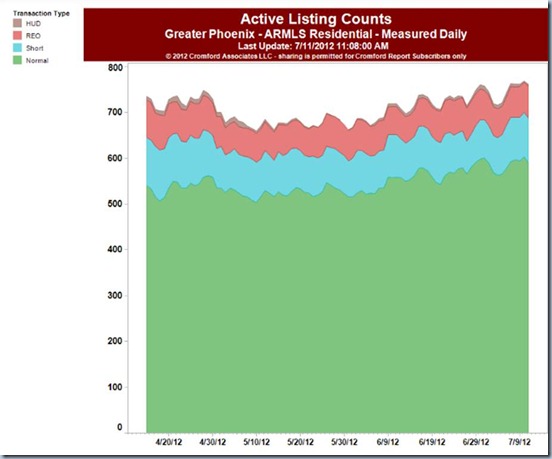 But we actually did see a small dip in prices last month, so please read on further to understand better Mike Orr’s current take on our market. It seems overall very positive but the recent HUGE gains are not expected to continue- hopefully we are in stabilization mode which is better for everyone!

July 2 – Market Summary for the Beginning of July

Market Summary for the Beginning of July

In last month’s summary we suggested that sales prices were in danger of getting ahead of themselves, and this proved to be a timely comment. In fact average and median prices recorded by ARMLS for for the month of June were far below those for May. The average $/SF for monthly sales declined by 4% from $101.42 to $97.44. This may have been a surprise to some of those who watched the average $/SF rise over 15% over the previous three months, but not to those who were also watching the average $/SF for pending listings, which turned south after April 30 and has been on a downward trend since. We always say you can’t predict sales prices by looking at the history of sales prices. You can predict them in the short term by looking at pending listings prices and you can predict them in the longer term by studying the balance between supply and demand. A 15% rise over three months is bound to increase supply and reduce demand, but at the moment the reduced demand still far exceeds the increased supply, so the underlying long term price direction is up. The short term direction is down and we need to see the average $/SF for listings under contract stabilize and take another move higher before the market can make significant price gains over $100 per sq. ft. The stabilization seems to be done and a slight upward trend may be taking shape, but we do not expect any more months like February through May for quite a while. A slow and steady price recovery is healthier and less stressful.

The drop in pricing between May and June was due to a number of different factors:

1. A large increase in the percentage of short sales closed in June versus May. We currently show short sales taking a 34% market share in June versus 26% in May. This is a huge change for such a short time. It also drove the listing success rate for short sales to an all time record high of 82.6%. Please refer to our daily observations for comments about how these short sales tend to be significantly over-reported by ARMLS at the end of a quarter. This effect may dissipate a little over the next couple of weeks.

2. A sharp fall in the number of Greater Phoenix high end luxury homes closing in June versus May. We saw only 2 sales of homes listed over $3m during June, very different from the 15 we saw during May. However the price range between $1 and $3m did rather well in June with 98 sales versus 96 in May. Both totals were higher than in the corresponding months in 2011 and the low to mid luxury market is showing considerable improvement.

3. A reduction is average $/SF for all categories of closed sales. Normal sales retreated from $118.64 to $116.86 per sq. ft. a decline of 1.5%. Lender owned properties declined from $75.18 to $74.50 per sq. ft. down 0.9%. But the biggest price drop by far came with short sales which fell from $77.90 to $72.91 per sq. ft. This decline of 6.4% was very sudden and coupled with the gain in market share for short sales was the largest reason for the overall price decline in the market. It seems lenders are keen enough to avoid foreclosures that they are now agreeing to short sale prices that are below what could be obtained for the home as an REO.

Sales volume strengthened by 5% over May with 9,051 sales reported through ARMLS, but it was down 13% compared with June 2011 due to the ongoing tight supply.

Maricopa County foreclosures were subdued in June, with 3,902 Notices of Trustee Sale – down 14% from May and down 13% from June 2011. Completed Trustee Deeds numbered 1,838, down 14% from May and down 55% from June 2011. Among the residential parcels that received Trustee Deeds, only 824 reverted to the beneficiary. This is fewer than in August 2007 and indicates REO inventory will continue to decline. Total REO inventory of residential properties in Maricopa County is now 5,907, down 72% from its peak in October 2010. The number of residential properties that have active foreclosure notices is 16,450, down 6% from last month and down 65% from the peak of December 2009.

Despite the sudden reversal in price movement in the last couple of weeks, the market has not really changed dramatically. However the greater supply at the more affordable end of the market will tend to create higher volume of lower priced homes. This is good for frustrated buyers but will mean the averages and medians may not resume their upward trend for a while. This should not be seen as a problem. A 15% price rise for March, April and May would normally be more than enough price movement for a whole year.

If you or someone you know needs help with either purchasing or sellin
g a home, please let us know- we are happy to help! Just call 480-243-4242