There was a short recovery for some and then a long, slow recovery for the large group remaining unemployed. Early on it was about the age of the unemployed, that has changed and now there is one significant indicator in regards to unemployment. It is education level. The largest group of unemployed Americans, at 64%, have only a high school education. The unemployment rate for those with at least 4 years of college is 11%. It is only 2% for those with a graduate degree. This could be a large factor for housing and why it has not been impacted by the high unemployment rates. 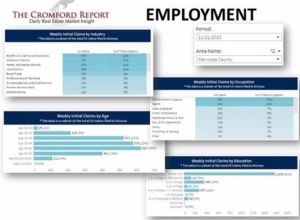 Forbearance:
Most forbearance plans are 3, 6, or 9 months long. Unless the borrower requests an extension; once the plan has run its course the borrower is removed from the plan. This is why we often see the biggest drops at the end of the month. (Tina Tamboer)

After two weeks in a row of slight forbearance count increases, the first increases in 25 weeks, I closely watched the numbers released this week, three weeks make an early trend. And they remained flat, unchanged from the previous week, 5.54% of loans and roughly 2.8 million loans in a forbearance plan. (MBA)

Luxury Real Estate:
Between corporate profits and a bullish stock market, the luxury real estate market is moving faster than ever. 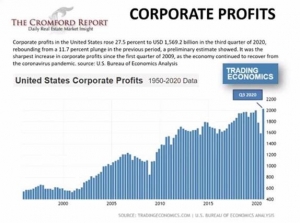 Stock market is on the rise. Wall Street does not like uncertainty. It improves after elections, regardless of who is elected, because it likes to know who is in the White House and Congress. Political uncertainty is poison for the stock market. And we have not seen a recovery like this since 2009!

The Cromford Market Index:
Available on the main page of the Cromford Report: http://cromfordreport.com/ (without a subscription)

What is driving the CMI this time? We have had different drivers over throughout the past 9 months. At the beginning we had a flat supply line with rising demand. Then supply was remained stable while demand increased. Since Thanksgiving, supply started dropping and demand has been relatively stable, only declining very slightly. Demand remains 35% above normal while supply is remains 65% below normal. Tina thinks that there might be a slight decrease in demand due to affordability challenges.

The CMI has been moving at Ludacris speed. In the first 10 days of December we have gone from 375.6 to yesterday’s 387.7. When the market turns, which it has not done yet, how long is the journey back to balance and what does that look like?

In 2005 it took 8 months from the turn to reach balance. In 2009 it took 4 months. In 2013 it took 6 months. Based on where we are now, even at a very fast clip, it will take at least 10-12 months to reach balance. Because it is still going up today, it will be even longer. As long as you are in a seller’s market prices rise. Prices may rise more slowly, but they still rise. We are nowhere near a crash, we are very far above normal. 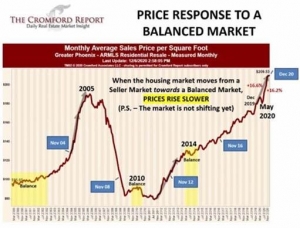 Affordability:
Wages did not increase from Q2 2020 to Q3 2020 but affordability dropped. Here is a chart from HousingWire illustrating price increases and wage increases. Wages are not keeping up with appreciation, putting pressure on buyers.

Greater Phoenix is on the edge of no longer being affordable. At the end of Q3 2020 our affordability rate was 61.9, down 3 points from Q2 2020 while wages remained flat. Below 60 is considered unaffordable. We dropped below the affordable range in 2018 and demand dropped. Demand drops when affordability is challenged. Tina believes that we will drop below 60 by the end of Q4 2020. Even if demand would start to come down now, because we are above normal, prices will still rise. The movement takes a long time. It hasn’t started yet, the day isn’t today but at some point there will be a shift.

When shifts start prices increase more slowly. That is the prediction for 2021 that prices will go up more slowly.

Appreciation:
Year over year appreciation through December is nearly 17%. Nearly all of that appreciation has come since May. With the speed of this increase it is no surprise people fear a bubble. This time is very different from 2005.

Prices are not going to go down. Don’t wait. We haven’t seen a price decline in 9 years.

2001 to 2005 rents dropped by 18%, not real housing demand. NYC and San Francisco have dropping rents and increasing rental vacancies. Tina doesn’t recommend buying in an area with dropping rentals rates.

Supply:
Available inventory is down 44.6% from 2019. Yikes! For most of the past several months our inventory levels stayed stable, just at very low levels. We were bringing them on the market very quickly but they were selling just as quickly. Since Thanksgiving supply has not been able to keep up with demand and inventory levels are dropping.

Year to date through December 6, we have had a 1.9% increase in new listings year over year. The week after Thanksgiving brought fewer new listings than expected. Even with 28% more new listings, it is not enough to keep up with the 35% above normal demand. 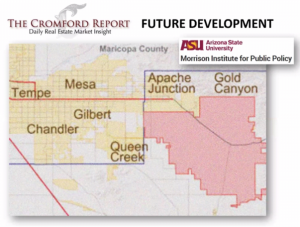 Builders are building in many areas throughout the valley around job expansion. Tons in Florence and Casa Grande. The Town of Maricopa is getting a hospital. Be sure to check out the Land Use Explorer http://geo.azmag.gov/maps/landuse/ on the Maricopa County Association of Governments website, https://www.azmag.gov/Programs/Maps-and-Data. The Land Use Explorer shows expansion, what is approved, proposed and pending. The yellow below shows single family developments. 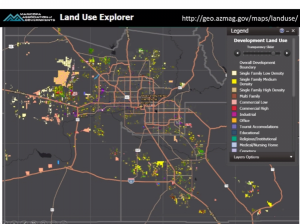 This is the best Q4 ever. More sales than ever before. We are up 25% year over year for the quarter. The week after Thanksgiving, listings over $1 million had an accepted contract rate 102% above this time last year. Year to date sales are up 2.5%, this is not higher because of the March slow down.

Every year CA is the #1 state feeding buyers to AZ. #1 county is LA County, followed by San Diego County and Orange County.

Who is buying what? 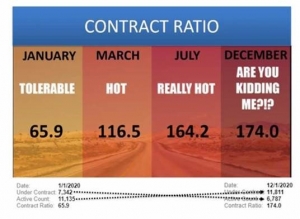