WASHINGTON, D.C. — Eight percent of U.S. adults choose cryptocurrency as the best long-term investment from a list of six investment options. Cryptocurrency is on par with savings accounts or CDs (10%) but well behind real estate (45%), stocks (18%) and gold (15%). Americans are least likely to say bonds are the best investment.

Cryptocurrency is a digital asset that is not issued or backed by a bank or government authority; it can be bought, traded and used for cash like other investments.

Since 2002, Gallup has regularly asked Americans to name what they see as the best long-term investment among various options, adding gold to the list in 2011 and cryptocurrency this year. The sample of 1,019 adults in the April 1-19 poll was randomly divided. Half of respondents were asked the 2011-2021 wording that includes real estate, stocks, gold, savings accounts and bonds; and half were offered a choice of cryptocurrency in addition to those five options.

The other investments’ results changed by one percentage point, or not at all, when cryptocurrency was included. 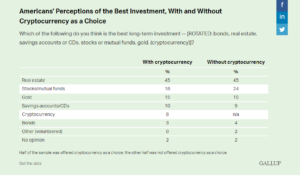 Cryptocurrency is more appealing to younger investors, with 13% of those under 50 saying it is the best investment, compared with 2% of those over 50. In fact, cryptocurrency ties with stocks as the second-best choice of investments among adults under 50, behind real estate.

The April 1-19 poll also provides Gallup’s annual update on U.S. stock ownership. It finds that 58% of Americans say they own stocks, slightly higher than in recent years but not a statistically significant increase.

Before the Great Recession, stock ownership consistently averaged above 60% among U.S. adults, but it has been at that level since 2008. 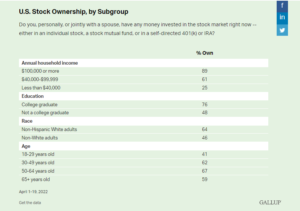 For now, with U.S. housing prices at record levels, Americans continue to perceive real estate as the best investment. The real estate market remains strong, but those record prices combined with higher interest rates could weaken it. Indeed, for the first time, a majority of Americans say it is a bad time to buy a house. If the real estate market does soften, people may begin to see other options as the best investment, as they did after the housing crash in the late 2000s.

To stay up to date with the latest Gallup News insights and updates, follow us on Twitter.

Learn more about how the Gallup Poll Social Series works.